So, climate crisis is one of the big ones. It has gradually taken over from the term ‘climate change’ as it is more immediate. The climate isn’t going to change, it is changing and that is the crisis. The current climate crisis that we are experiencing is going to rise the average global temperature and shift the climate of our planet.

Global warming is one of the consequences of the climate crisis, however, these terms are often used interchangeably and that can cause confusion. Not only will the climate crisis cause temperatures to rise but it might also cause more extreme weather events, including storms, droughts and more.

The greenhouse effect is when Carbon Dioxide and other gases (known as greenhouse gases) collect in the atmosphere, absorb sunlight and solar radiation which is bounced off the earth surface. These gases create a sort of bubble around the planet, which keeps the heat in and allows the earth’s surface to stay at a temperature that will keep us alive. This radiation would normally be released into space but due to pollutants that we have introduced into the atmosphere, the heat is being trapped within our atmosphere and is building up. This is causing the planet to increase in temperature and that is what is causing issues for many species who call Earth home.

Environmental issues are the topic of our generation, and rightly so. More and more the consequences of our modern day lives are coming to the forefront of our consciousness, but it can be easy to become overwhelmed with so many terms and ideas being thrown around. The Curious Environmentalist was created to make environmental and conservation topics more accessible. My name is Rebecca, the founder of The Curious Environmentalist, and as I am learning about the world around me and the problems it faces, I am sharing that knowledge in the hope that, together, we can make significant, long-term change. 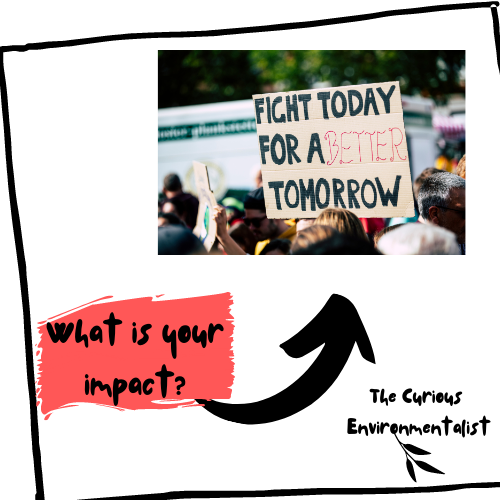 Global climate change is a crisis that is already upon us.

Global climate change is a crisis that is already upon us. It has a number of effects on the environment that are already painfully obvious and are a loud cry for us to do something to try and combat the rising global temperature before it is too late. Melting glaciers, rising sea levels, increasing extinctions, unpredictable seasons and increased extreme weather events. However, there are some increasingly troubling consequences that we need to be aware of. It is imperative that we change the course of our planet before we hit a point of no return.

We can avoid the most severe impacts of the climate crisis if we can limit the global temperature increase to under 1.5C, according to the United Nations. This doesn’t sound like much, and it will be difficult to keep the temperature rise to this limit, but the hard work now will certainly pay off in regard to the consequence we will hopefully avoid.

According the World Wildlife Fund, if we don’t limit the rise in temperature then we risk:

Here are some ideas for what you can do to lessen your contribution to the climate crisis:

If you are interested in environmental issues, then learning about the intricacies of the climate crisis will set you up for understand a whole range of wider subjects. Here are some useful links for you to browse, if you have any other recommendations the pop them in the comments below:

The Effects Of Climate Change – NASA

How You Can Stop Global Warming – NRDC

Our Planet Is Warming. Here’s What’s At Stake If We Don’t Ask Now. – WWF

Written by Rebecca Hansell for The Curious Environmentalist.

‘The Curious Environmentalist”? Then look no further!

You can find a range of content by following the links, why not brew another cuppa and get comfy?! You deserve it.

Want to read? Visit the blog!

Want to watch? Visit the vlog!

Want to listen? Visit the podcast!

Want to be my friend? Sign up to our newsletter!

Any questions, requests, musing, queries or other such things? Contact me!

Be a part of the solution.